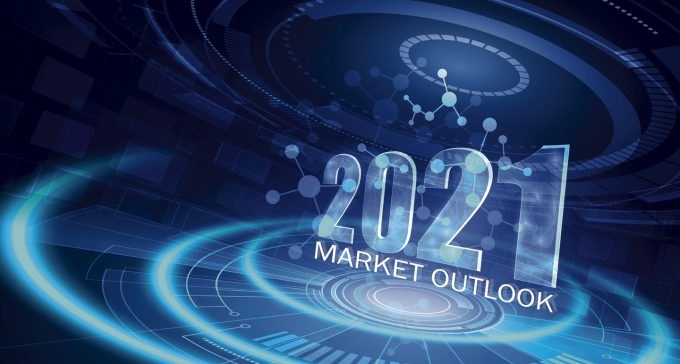 A new year offers a welcomed turn of the calendar and a fresh start. However, it’s difficult to put 2020 completely behind us just yet because the COVID-19 pandemic still presents a significant threat. Healthcare workers continue to perform heroically, while the rest of us must continue to make sacrifices until vaccines are widely distributed.

Despite the ongoing threat of COVID-19, it’s important to remember the tremendous progress the US economy has made in its recovery so far:

The economy lost some momentum as 2020 ended with more rapid COVID-19 spread and renewed restrictions. Still, the US economy appears poised to grow through the end of the pandemic, bolstered by the new $900 billion fiscal stimulus package passed December 27, 2020, which provides much-needed aid for small businesses, consumers, schools, and the healthcare system. US gross domestic product (GDP) is expected to grow 4.6% annualized in the fourth quarter of 2020, followed by 2.5% in the first quarter of 2021 (source: Bloomberg).

Along with fiscal stimulus, we see favorable demographics with the “Echo Boomers” (children of Baby Boomers), who are beginning to reach their peak spending years.  This will become a significant driver of economic growth in the future.

A better economic backdrop may mean better corporate earnings. Analysts’ consensus estimates for S&P 500 Index company profits have been rising steadily in recent months (source: FactSet) amid the improving economic outlook. S&P 500 companies are expected to return to 2019 profit levels in 2021—a remarkable achievement if realized.

Historically, which party occupied the White House or controlled Congress hasn’t had a meaningful impact on broad stock market performance. Policy matters – but larger economic forces are much more influential, and businesses are very good at adapting to different political environments.  Having an environment where it’s easier to start or run a business can make a big difference in people’s lives, but the policy impact on markets tends to be more focused.

Markets historically have seemed to prefer divided government, whether because it removes the extremes or it encourages a spirit of compromise.  At the same time, market performance when Democrats have held the presidency and controlled both the House and the Senate has been in line with longer-term historical returns [Figure 1].  The distribution of power in Washington, DC by itself does not mean a lot, especially since voters have the chance to change the balance of power every two years.

Taxes, Regulation, And Stimulus In Focus

The most important shift in policy expectations following the Georgia runoffs are around taxes, regulation, and stimulus prospects.

Taxes. Business taxes will almost certainly increase due to the new makeup of Congress. The Tax Cut and Jobs Act of 2017 (TCJA) lowered the top corporate tax rate from 35% to 21%. The top tax rate is likely to be raised to 25–27%, although the timing may be delayed depending on the economic recovery. When an increase is imposed, the hit to corporate profits potentially could be around 5%. Tax rates for the wealthy also are likely to increase and would likely take place under the obscure reconciliation process, which is how the TCJA was passed. The reconciliation process requires only a 50% majority, but the bill must be deficit neutral over a 10-year window to qualify.

Regulation. A Democratic majority in the Senate will also have regulatory implications. First, it would make it easier for President-elect Joe Biden to confirm cabinet members more tilted toward the left wing of the party. The majority party in the Senate also has considerable power to review regulation. Environmental regulations and labor standards probably will be a focus, likely reversing many Trump administration deregulatory efforts.

Stimulus. Democratic control of the Senate also will make it easier to pass additional stimulus measures, although, again, a slim majority may limit the scope. The most recent stimulus package, passed at the end of 2020, was for $900 billion. Democrats may try to pass an additional package of approximately $1 trillion or more. Passing some kind of infrastructure bill where there are some areas of bipartisan support also may become more likely.  Markets are likely to applaud potential economic benefits of additional stimulus in the near term, but it also will push deficits higher and may weigh on the economy over the longer run.

The overall impact of the “before” and “after” of the Georgia elections likely will be a mixed market at best, one that probably will be small compared to more important market drivers, such as the effectiveness of COVID19 vaccine rollout efforts and Federal Reserve policy. Higher taxes likely are the most market-negative takeaway of the Georgia runoffs, but there may be some economic offset from improved fiscal stimulus prospects, which could spur economic growth and support overall sales growth

With optimism and enthusiasm in the air, pent-up demand, added government spending, along with growing “Echo Boomer” Spending…we feel this could lead to solid market performance in 2021.

One thing 2020 has taught us as investors is the importance of sticking to a long-term investment plan. That may be easier said than done when volatility arrives—and we had our fair share of that in 2020. Investors who stayed with their plans in 2020 benefited as volatility presented opportunities.

Best wishes for a successful 2021, and please contact us if you have any questions.